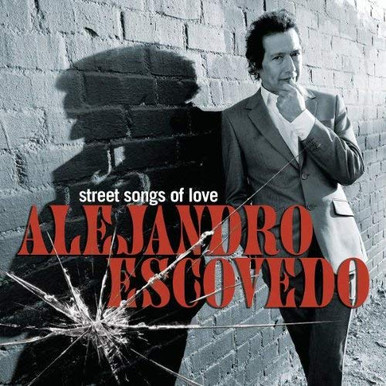 From his days in the now legendary punk/alt-country outfits The Nuns, Rank and File and his own True Believers, to his glowingly received solo gems including 2008's Real Animal, Escovedo has built a rapturous underground following among fans, songwriting peers and critics alike. His highly anticipated Fantasy Records debut, Street Songs of Love, is a 13-track celebration of survival, liberation and ultimate salvation featuring guest appearances by Bruce Springsteen and Ian Hunter. The albumm is produced by Tony Visconti.

Escovedo shares a manager with Bruce Springsteen these days, a connection that’s inescapable on this tenth solo LP. His Bossness himself adds brawn to the suitably muscle-bound duet “Faith”, and indeed there’s a ‘big production’ feel to this whole thing, no doubt aided by the presence of Born In The USA mixman, Bob Clearmountain. Yet it remains very much a personal Escovedo project, a meditation not only on the myriad forms of love but also a tribute to both family and departed friends.

The songs themselves (mostly co-written with Chuck Prophet) were forged over a two-month residency at Austin’s Continental Club, where he and his trusty backing band – The Sensitive Boys – chiselled and chipped until they took shape. Then along came Tony Visconti, adding the same robust, freewheeling production that he brought to 2008’s Real Animal. This is Escovedo in lean, bullish mood, tunes like “Silver Cloud” and “This Bed Is Getting Crowded” almost a throwback to the inflamed roots-rock of his ’80s band, the True Believers. “Tender Heart” even finds him and the band buzzing away like early Elvis Costello & The Attractions. That said, Escovedo is as reflective as he is melodic, and never more so than on “Down In The Bowery”. Here, aided by old buddy Ian Hunter (who he’s publicly thanked for sticking by him when stricken by Hepatitis-C a few years back), Escovedo addresses his teenage son, Paris, currently undergoing a turbulent stage. “I’d buy you a smile in a minute,” he sings in soft tones, “But would you wear it?”

Then there’s “Tula”, a tribute to late Mississippi writer and friend Larry Brown, a slippery swamp-funk thing that recalls both Little Feat and the Los Lobos of Kiko. And “Fort Worth Blue”, an acoustic elegy to his onetime guitarist Stephen Bruton, who died last year. The aforementioned “Faith” finds Escovedo and Springsteen punching out verses like an affirmation of the religious power of rock’n'roll itself. Which is more than apt and highly symbolic of this record as a whole. Escovedo sounds truly spirited.