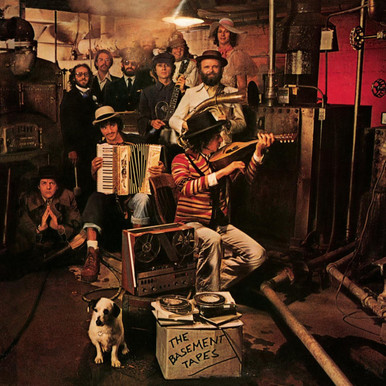 Disc 2:
1.Too Much of Nothing
2.Yea! Heavy And A Bottle Of Bread
3.Ain't No More Cane
4.Crash On The Levee
5.Ruben Remus
6.Tiny Montgomery
7.You Ain't Goin' Nowhere
8.Don't Ya Tell Henry
9.Nothing Was Delivered
10.Open The Door, Homer
11.Long Distance Operator
12.This Wheel's On Fire

The Basement Tapes is a studio album by American singer-songwriter Bob Dylan and the Band. It was originally released in 1975, by Columbia Records and was Dylan's 16th studio album. The songs featuring Dylan's vocals were recorded in 1967, eight years before the album's release, at houses in and around Woodstock, New York, where Dylan and the Band lived. Although most of the Dylan songs had appeared on bootleg records, The Basement Tapes marked the songs' first official release. Pressed on two standard black vinyl records.