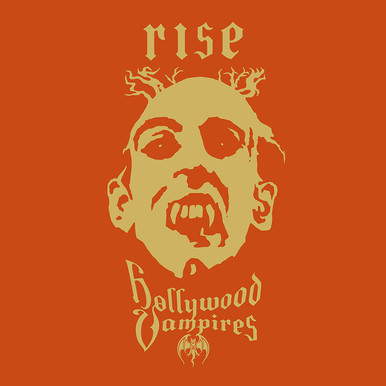 The legend of the Hollywood Vampires began in the upstairs bar inside the wicked halls of legendary Rainbow Bar and Grill on Sunset Strip in Hollywood in 1972. The location became the home away from home for stars like Alice Cooper, Ringo Starr, John Belushi, John Lennon, Keith Moon, Keith Emerson, Harry Nilsson, Marc Bolan and many more to get their (often) daily fixture. The staff at the Rainbow dubbed the crew the Hollywood Vampires  their very own secret late-night drinking club. More than 40 years later, Cooper and good friend Johnny Depp got together and decided the spirit of the Hollywood Vampires should live on (minus the drinking). They were joined by Aerosmith lead guitarist Joe Perry. The most important thing about the Hollywood Vampires is that they are not constructed, they are not manufactured: the band lives and breathes the spontaneous magic of three mega stars. The approach on the band's new album is drastically different than on their 2015 debut album: they aren't simply opening a new chapter but they literally intent to Rise above. Consisting mainly of original material (and a cover of David Bowie's Heroes  sung by Johnny Depp, Johnny Thunder's You Can't Put Your Arms Around A Memory sung by Joe Perry, as well as The Jim Caroll Band's People Who Died), the sophomore album is purely rock'n'roll  in the true sense of the word and proves once and for all that the Hollywood Vampires aren't only procuring a legacy but are  without doubt - this is some of the greatest rock'n'roll to enjoy this year.