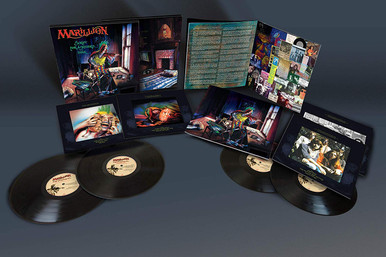 The DELUXE EDITION opens with a newly remixed stereo version of Script for a Jesters Tear by Andy Bradfield and Avril Mackintosh. In addition, the collection also features new stereo remixes for the b-side Charting The Single that was released in January 1982, as well as the Market Square Heroes EP that followed in October that same year.

It also includes the debut of a previously unreleased concert that captures Marillion performing in London at the Marquee Club on December 29, 1982. Recorded a few months before Script for a Jesters Tear was released, the show features live versions of all six album tracks: He Knows You Know, The Web, Garden Party, Chelsea Monday, Forgotten Sons and the title track.

The concert also features performances of non-album tracks like Three Boats Down From The Candy and the 19-minute epic Grendel from the Market Square Heroes EP. A live version of Margaret is also included. A different version of that song appeared in June 1983 as the b-side for the Garden Party single.