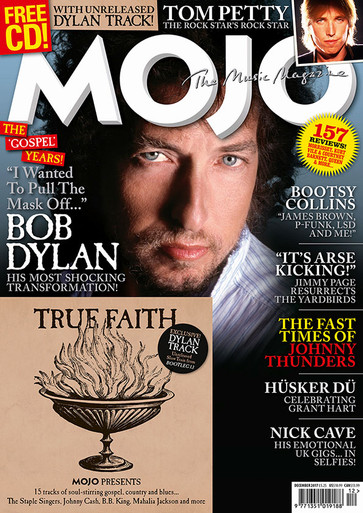 Bob Dylan a born again Christian? It was the craziest thing anyone had ever heard. Yet as an imminent new Bootleg release clarifies, the change brought incandescent music as well as extraordinary stories. They’re all in the new MOJO magazine, along with a FREE CD that features an EXCLUSIVE UNRELEASED DYLAN RECORDING – one of the jewels of his new box set – along with a soul-stirring mix of vintage gospel, country, blues and rock. Also in the issue: our tribute to the great Tom Petty; Jimmy Page finds amazing Yardbirds music in his vault; Bootsy Collins funks us up. Plus: the hair-raising life and times of Johnny Thunders, Hüsker Dü, Morrissey, Queen and Nadia Reid: our favourite new songwriter!

COVER STORY: BOB DYLAN Dylan a born again Christian? It was the craziest thing anyone had ever heard. Yet as an imminent new Bootleg release clarifies, the change brought incandescent music as well as extraordinary stories. Jim Keltner, Clinton Heylin, Michael Simmons and more shine a light…

THE YARDBIRDS Jimmy Page has been scouring the vaults, emerging with revelatory music from his formative group’s final year. “It was the blueprint for Led Zeppelin,” he tells MOJO.

BOOTSY COLLINS The positive power of The Funk took him from James Brown’s right hand to solo fame, but there was a time when Being Bootsy was too big a burden to bear…

JOHNNY THUNDERS The doomed Doll with the bogbrush ’do became the patron saint of punk, before bad luck and good dope cut in. Friends and bandmates recall the man behind the myth.

NADIA REID Songs of incredible honesty, sung with limpid beauty, have placed the New Zealander streets ahead of her fellow singer-songwriters. Ex-boyfriends beware!

HÜSKER DÜ The death of drummer-singer Grant Hart, and a release of the alt-rock triumvirate’s thrilling early work have tragically converged. Keith Cameron salutes both.

PLUS: Tom Petty Remembered / Backstage With Nick Cave / Sly Stone And “The Mountain Of Blow” / 25 Years Of Later… With Jools Holland / How To Buy… The Temptations / Thomas Dolby’s Self Portrait / The Professionals’ post-punk carcrash / Peter Hammill’s Mindblowers / Charles Bradley Tribute