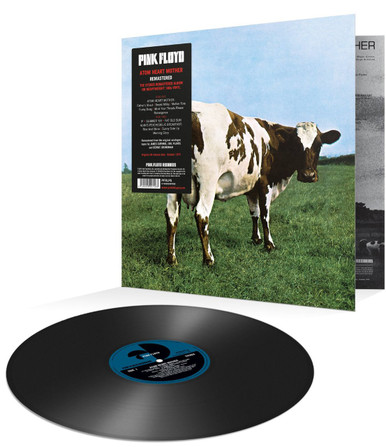 On 3 June 2016, Pink Floyd Records began the reintroduction of the Pink Floyd catalogue on vinyl for the first time in over two decades with the release of ‘The Piper at the Gates of Dawn’, ‘A Saucerful of Secrets’, the soundtrack from the film ‘More’ and the 2 LP set ‘Ummagumma’.

On September 23rd 2016 this long awaited reissue campaign continues with the vinyl release of the classic albums Atom Heart Mother, Meddle and Obscured By Clouds.

Special care has been taken to replicate the original packaging. The first batch of releases, mastered by James Guthrie, Joel Plante and Bernie Grundman will be pressed on 180gram vinyl for optimum sound quality.

Pink Floyd featuring Syd Barrett, Roger Waters, Rick Wright and Nick Mason first broke onto the music scene in 1967, with the hit single ‘Arnold Layne’. Despite the departure of Syd Barrett, the group, which now included David Gilmour, recorded some of the most innovative and ground breaking records of the time, culminating in 1973 with one of the biggest selling albums of all time, ‘The Dark Side Of The Moon’. There followed numerous global number 1 albums, including, ‘The Wall’, ‘Animals’, ‘Wish You Were Here’, ‘The Final Cut’ and 2014’s finale, ‘The Endless River’.