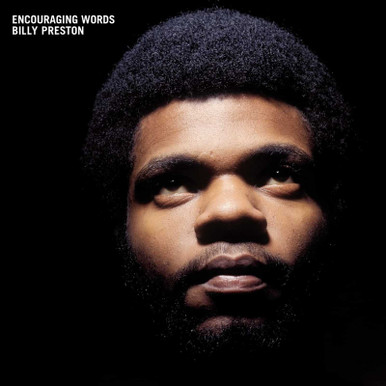 To celebrate Billy Preston’s induction into the Rock & Roll Hall of Fame in October 2021 Apple Records and Universal Music Catalogue will be making Billy’s highly regarded 1970 album ‘Encouraging Words’ available on vinyl for a limited period.

First released in the UK on 11 September 1970 the album was co-produced by Billy and George Harrison, with two of George’s songs – ‘All Things Must Pass’ and ‘My Sweet Lord’ – issued here for the first time, two months before his own recordings appeared on the triple album ‘All Things Must Pass’.

In 2010 Record Collector magazine described ‘Encouraging Words’ as “one of the finest titles in the Apple Records catalogue”, while virtuoso keyboard player Rick Wakeman told BBC Radio 4’s John Wilson he considered Preston’s two Apple albums “absolute gems – a perfect combination of gospel and funk.” The album was last released on vinyl in 1992.

The original album credits did not include details of contributing musicians, though the sleeve notes of the 2010 CD reissue included Eric Clapton, Klaus Voormann, Ringo Starr, Bobby Keys and the Edwin Hawkins Singers.