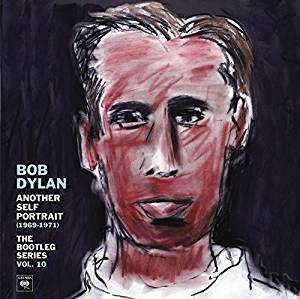 Columbia Records will release Bob Dylan's The Bootleg Series, Vol. 10 - Another Self Portrait (1969-1971) on August 27*, bringing fresh perspective to one of the artist's most controversial periods and revealing it to be one of his most wonderfully creative and prolific. Containing 35 rarities and previously unreleased recordings, Another Self Portrait (1969-1971) is the latest edition of Dylan's acclaimed Bootleg Series and is available in both a standard two-disc set and in a four-disc deluxe box set.

The unreleased recordings, demos and alternate takes on Another Self Portrait -- drawn mainly from the 1970 studio recording sessions that resulted in the official 1970 albums Self Portrait and New Morning albums -- shed new light on an essential and pivotal period in the artist's ongoing musical evolution.

The original Self Portrait, released in June 1970, was Dylan's tenth studio album and his first to receive real pans from the music press ("What is this shit?" was literally the opening sentence of Greil Marcus's review in Rolling Stone while Robert Christgau gave the album a "C PLUS" rating in the Village Voice). Nevertheless, Self Portrait hit Number 4 on the US Billboard 200 and Number 1 on the UK album charts.

In the Self Portrait sessions, Dylan played a selection of songs accompanied by a small ensemble of musicians, primarily David Bromberg (guitar) and Al Kooper (keyboards, guitar), with producer Bob Johnston later adding overdubs to the basic tracks in Nashville. Another Self Portrait presents these original session masters for the first time without overdubs.

Another Self Portrait reveals fresh aspects of Dylan's vocal genius as he reimagines traditional and contemporary folk music as well as songs of his own. Across these unvarnished performances, Dylan is the country singer from Nashville Skyline ("Country Pie" and "I Threw It All Away"), an interpreter of traditional folk ("Little Sadie," "Pretty Saro") who's right at home singing the songs of his contemporaries (Tom Paxton's "Annie's Gonna Sing Her Song" and Eric Andersen's "Thirsty Boots") before returning to writing and singing his own new music ("Went To See The Gypsy," "Sign On The Window").

While the original Self Portrait was a deliberate act of iconoclasm that shattered Dylan's image as "generational spokesperson" while stretching the boundaries of pop music and his own, the album's successor, New Morning, marked Dylan's return to songwriting. Another Self Portrait gives fans a chance to reappraise the pivotal recordings that marked Dylan's artistic transformation as the 1960s ended and the 1970s began.

Featured on Another Self Portrait are a previously unavailable version of "Only A Hobo" and the demo version of "When I Paint My Masterpiece," a track that finds Dylan, who'd been signed as a recording artist not quite a decade earlier, looking to the future, promising that "Someday, everything's gonna be smooth like a rhapsody, when I paint my masterpiece."

The Bootleg Series, Vol. 10 - Another Self Portrait (1969-1971) will be available in a standard two-disc configuration as well as in a four-disc deluxe boxed set which will include, for the first time ever, the complete historic performance by Bob Dylan and The Band from the Isle of Wight Festival on August 31, 1969. Housed in a slipcase, the deluxe edition will include the newly remastered version of the 1970 Self Portrait album, in its entirety with original sequencing, in addition to two hardcover books featuring revisionist liner notes penned by Greil Marcus (author of the notorious "What is this shit?" 1970 Self Portrait review in Rolling Stone).