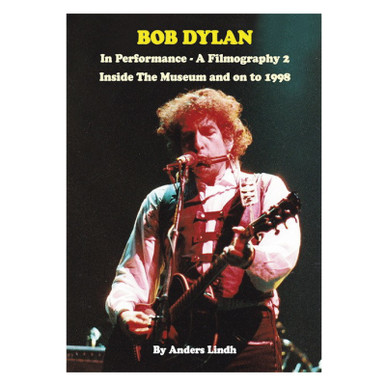 Bob Dylan - In Performance - A Filmography 2: Inside The Museum and on to 1998 By Anders Lindh (BOOK)

Several years in the making ‘Inside The Museum and onto 1998’ continues the journey through the filmed legacy of Bob Dylan in performance, covering all the many televised appearances, audience shot videos, etc. Chronological and detailed, but still in a narrative style, piecing together the different aspects of each filmed document into the life and work of Bob Dylan. Of special interest to many will be the substantial updates from the earlier years resulting from new finds including, most importantly, a research trip the writer did to Tulsa and the Dylan Archives in 2019, allowing a detailed study, among other things, of the main bulk of 1966 material shot by D.A Pennebaker and Howard Alk for Eat The Document, including a date by date description of on and off stage footage, with detailed lists of filmed songs (complete, incomplete or fragments) from each concert played during the 1966 Tour. A special chapter is also dedicated to the 2019 film The Rolling Thunder Revue – A Bob Dylan Story.

After all this, the story continues where Volume One ended, picking up from 1988 through 1998, proving that, despite Dylan’s generally perceived reluctance to do such, he did a wealth of high-profile TV appearances during this period - as well as attempted but unreleased specials. As in Volume One, each and every audience shot video is featured in the book, including many recently unearthed films of unparalleled quality. 300 pages all in all, 240 printed, plus a 60-page digital appendix with all the song titles, date by date, included in the audience videos.