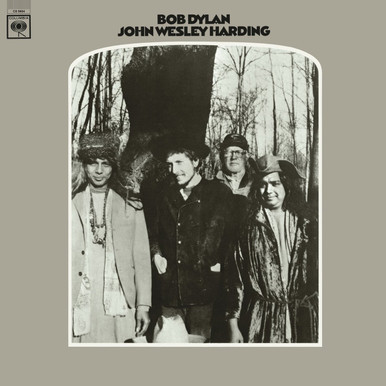 Side A:
1. John Wesley Harding
2. As I Went out One Morning
3. I Dreamed I Saw St. Augustine
4. All Along the Watchtower
5. The Ballad of Frankie Lee and Judas Priest
6. Drifter's Escape

Side B:
1. Dear Landlord
2. I Am a Lonesome Hobo
3. I Pity the Poor Immigrant
4. The Wicked Messenger
5. Down Along the Cove
6. I'll Be Your Baby Tonight

John Wesley Harding is the eighth studio album by American singer-songwriter Bob Dylan, originally released on December 27, 1967 by Columbia Records. Produced by Bob Johnston, the album marked Dylan's return to acoustic music and traditional roots, after three albums of electric rock music. John Wesley Harding shares many stylistic threads with, and was recorded around the same time as, the prolific series of home recording sessions with the Band, partly released in 1975 as The Basement Tapes.