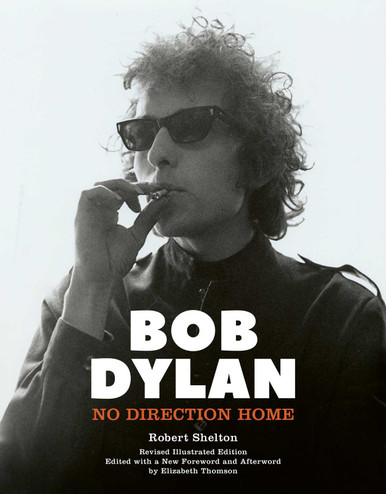 Bob Dylan - No Direction Home. Edited and with a Foreword and Afterword by Elizabeth Thomson.

Robert Shelton met Bob Dylan when the young singer arrived in New York in 1961. He became Dylan's friend, champion, and critic. His book, first published in 1986, was hailed as the definitive biography of this moody, passionate genius. Shelton tells the intimate and first-hand story of Bob Dylan's formative years in Greenwich Village NYC, and it is the only biography that has been written with his active cooperation.

Dylan gave Shelton access to his parents, Abe and Beatty Zimmerman whom no other journalist has ever interviewed; to his brother, David; to childhood friends from Hibbing; to fellow students and friends from Minneapolis; and to Suze Rotolo, the muse immortalized on the cover of Freewheelin', among others. Concluding Dylan's story backstage during his triumphant 1978 world tour, No Direction Home took 20 years to complete and when it was finally published the book received widespread critical acclaim.

Following his Nobel Prize for Literature Award in 2016, Dylan's standing is higher than at any time since the 1960s and Shelton's book is now seen as a classic. This new illustrated edition, published in the year of Dylan's 80th birthday, includes key images of Dylan throughout his incredible, enduring career, making it a must for all Dylan fans.

About the Author:
Robert Shelton was born in Chicago in 1926 and was on the staff of the New York Times for two decades until he went to Europe. Best known as the man who 'discovered' Bob Dylan, he was the principle chronicler of the 1960s US folk revival. His books include the Woody Guthrie collection Born to Win, The Face of Folk Music, The Country Music Story and The Electric Muse. He died in 1995.

Elizabeth Thomson knew Robert Shelton for the last 15 years of his life. She was responsible for the 2011 edition of No Direction Home, which restored Shelton's original manuscript and reshaped the book so it honoured his original intentions. This new edition abridges that text making it accessible to a wider readership. Thomson has been a Visiting Fellow of the Open University Sixties Research Group and was a contributor to The New Grove Dictionary of Music & Musicians. A widely published journalist, her books include Conclusions On the Wall: New Essays on Bob Dylan, The Dylan Companion, and Joan Baez: The Last Leaf.