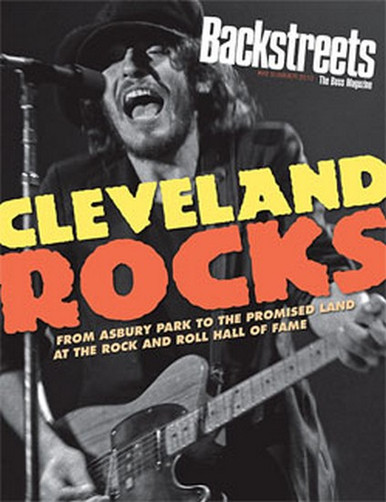 Here's a first look at the summer issue of Backstreets, which features an in-depth look at the massive Springsteen exhibit currently on display at the Rock and Roll Hall of Fame. With a whole host of Cleveland coverage in this issue, we tapped photographer Janet Mocoska for the cover -- she's been shooting Bruce in C-town since he first started playing there in 1974. The cover shot is from 1976 at the Allen Theatre, and more of Janet's photos are inside.

The focus is on the current Springsteen exhibit at the Rock and Roll Hall of Fame which we visited on our Madison Square Garden/Cleveland Trip last November.

"From Asbury Park to the Promised Land: The Life and Music of Bruce Springsteen."

Backstreets takes you through the exhibit from floor to floor, picturing many of the artifacts and documenting Bruce's handwritten notes along the way.The full text of curator Jim Henke's interview with Springsteen himself about what's on display. Portions of this interview can be heard at listening stations throughout the exhibit; Backstreets is the only place you'll find the whole thing.

The Cleveland theme continues as WMMS program director John Gorman writes about Springsteen's rise in the region, culminating with the '78 Agora broadcast, in this excerpt from his book The Buzzard: Inside the Glory Days of WMMS and Cleveland Rock Radio.

Plus: The Backstreets Interview with Bruce's latest collaborator, Alejandro Escovedo; 2010 performances so far, including Dave Marsh on The Rascals and John Wesley Harding on WAMfest; Bruce's Ellis Island Foundation speech; reviews of the latest CD-Rs and Bruce boots, and more. 56 pages, full-colour.