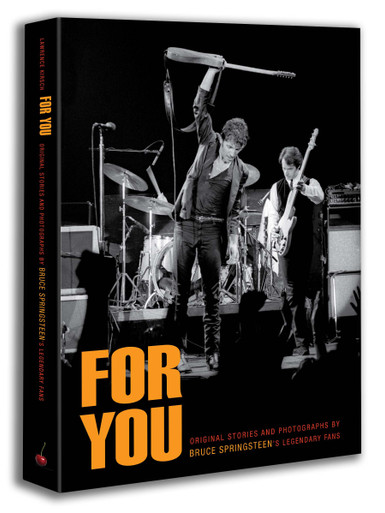 SALE: These are "Imperfect" copies that received slight damage during bulk shipping to us

such as dinked corners etc.

“…the moment the house lights go out, and you know The Boss is about to hit the stage, there is a single moment when you’re filled with anticipation unlike anything else most of us get to experience throughout any of our lifetimes. For the Springsteen fan there is simply nothing quite like those few seconds between when the Boss takes the stage and those first few notes that start the concert.

It didn’t matter if we were from America, Italy, Germany, England, Spain, Canada, Holland, or any other country in the world – we were all members of Bruce’s world and each night he was on stage he warmly welcomed us into that world…the one where we all belonged.

From day one we were a community – we were family… We were the Bruce Tramps. For a Springsteen fan it’s never simply one concert per tour, it’s always as many as you can get to. There are myriad reasons why Bruce fans love to go “Rockin’ All over the World” to see his concerts…and Bruce seems to understand and appreciate that fact by changing the songs he plays every night.”

Foreword – For You. A compilation of Bruce Springsteen fan memories.

The first time you see Bruce Springsteen in concert is usually a frozen moment in your memory. Before the concert begins, waiting in anticipation, the Boss takes the stage, ready to transport you into the world from which you really don’t want to waken – the tension is there, shimmering in the air around you.

With over 400 photos and 200 unusual tales from some of Bruce Springsteen’s most dedicated fans - this is one book you won’t want to miss.

For You Original Stories and Photographs by Bruce Springsteen's Legendary Fans is a limited edition book first published in 2007. It has been sold out since 2009. What the previous book promised is what we are getting set to deliver, again. This reprint of the book is a hard to find item for you to consider adding to your Springsteen collection.

The original volume took over two and half years in research and production, and includes hundreds of stories and anecdotes written by Springsteen’s legendary fans, as well as over 400 photographs, most of them never previously published.

Publisher Lawrence Kirsch said: “Being a life-long Springsteen fan myself, I recognized there was a pent-up desire for fans to come together and share. Something magical happens at a Springsteen concert. Each concert is like a huge family reunion, even though in all reality you actually know few of the people there. Complete strangers connect with an immediacy that is tangible.”

also be applied to the life-long Springsteen fan base. For nearly five decades, Bruce Springsteen fans have remained loyal, committed and young in heart and spirit. Grandparents, grandchildren, aunts and uncles, parents, children, singles, couples, young and old …all are to be found at a Springsteen concert. For Bruce fans are quite simply fanatic about him.

Well, as the recollections in this book describe so passionately, the short answer is simply that for the fans the Boss always delivers … as he tells them in Thunder Road: "Show a little faith, there's magic in the night."

“So, in 2005 I came up with the idea for this book and set up a web site called: For You Bruce to confirm if my theory was correct. I asked fans to write in with their experiences, and I was simply amazed by the response. Over 1500 fans from across the globe submitted stories and anecdotes to the website. It was difficult to make the final selection.”

Unfortunately, there was no way to include them all. All I can offer is that the experiences and memories that were chosen are representative of so many other stories we received. Fans will be able to identify and relate through the memories of others. I promise you there is something for everyone in this book.”

Although Kirsch requested the stories be submitted in English, he did in fact receive a number of stories in a wide variety of the world’s languages. So, to underscore the fact the music made by Bruce Springsteen and the legendary E Street Band, the Sessions Band - as well as the other musicians and performers with whom he has played, does indeed cross the language barrier, touching fans across the globe, Kirsch has scattered throughout the book some stories written in languages other than English. His personal recognition For You - the fanatical Springsteen fan, no matter what language you actually speak.

“I wanted everyone to feel included,” said Kirsch, “so these non-English language stories serve as reminders that the Boss has a worldwide fan base and his music and the Bruce Springsteen concert experience transcend the boundaries of one specific language.” 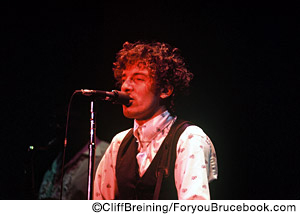