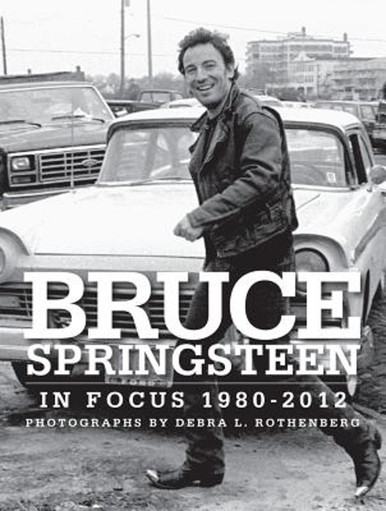 PLEASE NOTE THIS IS A WAREHOUSE FIND AND MAY CONTAIN SMALL DEFECTS OR SOILING SUCH AS SLIGHTLY BENT CORNERS.

Bruce may have been Born to Run, but Debra L. Rothenberg was born to shoot. Debra is an award-winning photographer residing in New York City. She grew up in Bergen County, New Jersey, and earned a Bachelor of Fine Arts degree in photographic illustration/photojournalism from the Rochester Institute of Technology. Among her many accomplishments are first place awards from the National Press Photographers Association, and her listing in Whos Who. She has been the concert photographer for the New York Daily News since 1999. Her extensive clientele includes ABC-TV, People, Rolling Stone magazine, Entertainment Weekly, Columbia/CBS Records, EMI Music Publishing, Prudential, New York University, and many others. Debra is a member of the National Press Photographers Association and her photography has been distributed and exhibited worldwide. Whether photographing a news or sports event, Bar Mitzvah, or celebrity portrait or concert, her photographic style incorporates the energy, emotion, and passion she not only feels for her photography, but for life.

For more than three decades, Debra L. Rothenberg has been photographing Bruce Springsteen. Her Springsteen photos have been exhibited in galleries and published in top magazines around the world. Like Bruce Springsteen, Rothenberg was born and raised in New Jersey. And now, finally, through more than 32 years of concert tours in national and international arenas and stadiums, and impromptu Jersey Shore club appearances - from the legendary Stone Pony in Asbury Park to nightspots like Rum Runner in Sea Bright and Cheers in Long Branch - the award-winning photographer has gathered it all in one glorious hardbound tribute to the man who inspired her dreams. BRUCE SPRINGSTEEN IN FOCUS 1980-2012 is an unparalleled collection of memorable and iconic Springsteen photography from a perspective only a true "Jersey Girl" could offer. Selected by the Wall Street Journal as one of its "Best Photo Books for Fall," called "amazing" by the New York Daily News, this 276 photo, 200-page coffee table book is a must for all fans, chronicling The Boss from "The River" Tour to "The Wrecking Ball" Tour and many Jersey Shore haunts in-between. Says Robert Santelli, executive director of the Grammy Museum and fellow Jersey Shore native who has authored books and numerous articles on The Boss: "When it comes to photographers that have documented the career of Bruce Springsteen on the Jersey Shore, Debra Rothenberg has few peers."