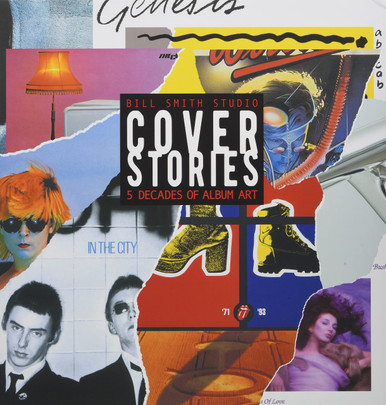 It all started with The Jam logo... Well actually it all started many years before that, 1966 to be exact when I was 15 years old and not only discovered how much music meant to me but how much the album covers meant too. The Beatles Revolver album had some great pop tracks including one of my favourite songs – For No One – my first love began and ended that summer while I played that song constantly. The album also had a great sleeve by Klaus Voormann which, I found intriguing, with its line drawn portraits mixed with a photo\-collage of the band. I was hooked and knew even then that I wanted to be part of this – I was never going to be a brilliant musician but maybe I could be involved with creating the images that went with the music. I spent so many happy hours in my local record store with headphones on in a booth, listening to the latest releases like Neil Young’s After the Gold Rush album, studying the covers, reading the lyric sheets. I loved the stories, the unlimited possibilities to link pop and culture. The fact that it would always be there on the shelf for as long as the particular album was listened to and even longer when stored in a dusty cellar years after the record was no longer on the turntable. From that point on all roads led to Polydor Records and the first Jam album cover in 1977. During the 70’s and 80’s a number of new graphic designers found their way into the music business, Barney Bubbles’ brilliant work for Stiff Records, Storm Thorgesen’s Hipgnosis Pink Floyd covers, Malcolm Garrett’s Buzzcocks sleeves, Stylorouge and Siouxsie and the Banshees, Form Design amongst many others, all helping to create a paradigm of album cover design, I joined these serried ranks in 1976. I had been at Polydor for a year or so as Art Director creating covers for artists as diverse as Peggy Lee, The Who and George Benson, I hadn’t yet reached my nirvana but Nevermind... along came The Jam. A new band with new music to share and me with a 12\-inch blank canvas to fill with ideas. An Art Director is a really great job, you come up with ideas with an artist and then you find amazing people to collaborate with and in partnership you make those ideas come to life. I ended up doing 5 album covers and 16 single bags for The Jam between 1977 and 1980, 3 short years of joy. I left Polydor in 1978 and set up my own studio in what was basically a corridor in a fashion house on Great Marlborough Street in London’s West End. From that little cubby\-hole I started working with many different record companies and many different bands and artists. Album covers are permanent items, unlike much packaging which is thrown away once the product is removed, the album cover becomes a possession and has a value beyond just protection. They are a collaboration and a partnership between musician, designer and record company. There are arguments and compromises, certainly many fights but in the end, the cover wins out. There have been many great art directors and designers, artists, photographers and typographers all helping to create cardboard packaging for some black vinyl, creating great, mediocre or downright rubbish sleeves, but always interesting and exciting. Between 1976 and 2019 we worked with over 200 different bands and artists, creating many hundreds of covers, all with a story... the book covers (sorry) just some of them.