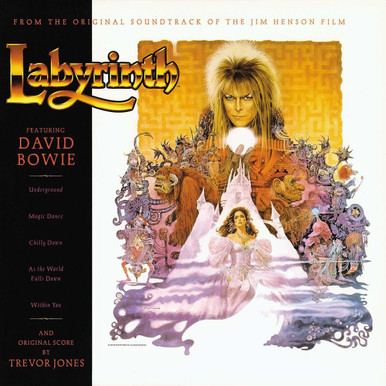 SIDE A:
1. Opening Titles Including Underground
2. Into The Labyrinth
3. Magic Dance
4. Sarah
5. Chilly Down
6. Hallucination

Long out of print, the album, which was remastered at Capitol Studios, will be available on high quality 180gm black vinyl and include the faithfully replicated original jacket and artwork. Includes download voucher. Praised by film critics and moviegoers alike for its astonishing imagery and distinct characters,Labyrinth has been celebrated for being wildly ahead of its time. Directed by Jim Henson and executive produced by George Lucas, the film, which stars David Bowie as Jareth, The Goblin King, is full of memorable creatures brought to life by Jim Hensons Creature Shop, working closely with acclaimed artist and conceptual designer Brian Froud. Described by The Atlantic as 101 minutes of Bowie rock opera and Hensonian spectacle,Labyrinth was the second major soundtrack that Bowie worked on, falling between his 16th and 17th studio albums, Tonight and Never Let Me Down.