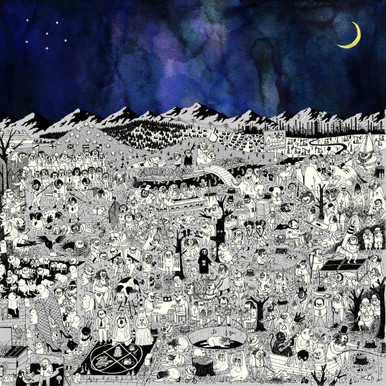 1.Pure Comedy
2.Total Entertainment Forever
3.Things It Would Have Been Helpful To Know Before The Revolution
4.Ballad Of The Dying Man
5.Birdie
6.Leaving LA
7.A Bigger Paper Bag
8.When The God Of Love Returns There’ll Be Hell To Pay
9.Smoochie
10.Two Wildly Different Perspectives
11.The Memo
12.So I’m Growing Old On Magic Mountain
13.In Twenty Years Or So

Father John Misty’s ‘Pure Comedy’ is the highly anticipated follow up to his internationally acclaimed album, ‘I Love You, Honeybear’.

Father John Misty aka Josh Tillman’s bent critiques, bared humanity and gently warped classic songwriting are all here in equal measure and, at 75 minutes, there’s a lot of it. The album navigates themes of progress, technology, fame, the environment, politics, aging, social media, human nature, human connection and his own role in it all with his usual candour, in terms as timely as they are timeless.

‘Pure Comedy’ was co-produced once again by Josh Tillman and long-time producer Jonathan Wilson, mixed by Tillman, Wilson and Trevor Spencer and mastered by Bob Ludwig at Gateway Mastering Studios. The album features string, horn and choral arrangements from classical iconoclast Gavin Bryars (‘Jesus’ Blood Never Failed Me Yet’, ‘Sinking Of The Titanic’), with additional contributions from Nico Muhly and Thomas Bartlett.