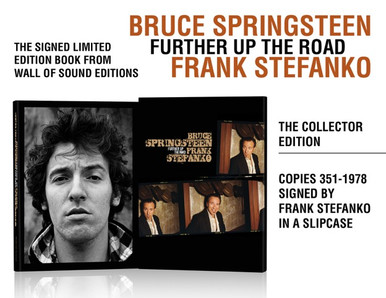 Shipping cost of £10 (to Italy) will be added at checkout

"Frank’s photographs were stark. His talent was he managed to strip away your celebrity, your artifice, and get to the raw you. His photos had a purity and a street poetry to them. They were lovely and true, but they weren’t slick. Frank looked for your true grit and he naturally intuited the conflicts I was coming to terms with. His pictures captured the people I was writing about in my songs and showed me the part of me that was still one of them. We had other cover options but they didn’t have the hungriness of Frank’s pictures.” – Bruce Springsteen (Reprinted by permission from "Born To Run", Simon & Schuster, 2016)

Wall of Sound Editions is delighted to announce that it will publish a phenomenal new limited edition book of photographs of Bruce Springsteen made by Frank Stefanko.

BRUCE SPRINGSTEEN. FURTHER UP THE ROAD will be published in November 2017 and is an astounding anthology of over 40 years of largely unseen images of Springsteen, all shot by Stefanko throughout Springsteen’s epic career. Frank Stefanko has spent over four decades working closely with Bruce Springsteen. He shot the iconic covers for Darkness on the Edge of Town and The River albums as well as the cover shot for Springsteen's best-selling Born To Run autobiography and accompanying album Chapter And Verse. The new hardback collectors edition features a personal introduction text by Bruce Springsteen himself and is packed full of unseen photos and features, with image captions and text by Stefanko and forewords by fellow Springsteen photographers Eric Meola, who shot the Born To Run and The Promise album covers, and Danny Clinch, who shot the Devils & Dust, The Rising, The Seeger Sessions, and Working on a Dream album covers.

The book will feature a never before published shoot with Springsteen from 2004, at his residence in Colts Neck, NJ and to round things up, in April 2017, Bruce Springsteen granted Frank Stefanko a brand new, exclusive shoot at his studio in Colts Neck, NJ, specifically for inclusion in BRUCE SPRINGSTEEN. FURTHER UP THE ROAD. New Jersey based, self taught photographer Frank Stefanko has been taking photographs for over 50 years and also boasts an impressive 40 year working relationship with acclaimed rock artist Patti Smith. His close college friendship with Patti, led to his initial foray into music photography and he was introduced to Springsteen in the late seventies.

Stefanko is the author of two books, Days of Hope and Dreams: An Intimate Portrait of Bruce Springsteen and Patti Smith: American Artist. "I love the “in-your-face” immediacy of these images; their stark innocence and how they appear to be photographs that don’t try to be something they are not. In some of the outtakes from the 'Darkness' sessions, Bruce simply stares at the camera with the dazed look of someone who has just shaken off a couple of blows from an unseen adversary. The images in this book are a kaleidoscope of Springsteen’s words and songs, as well as a visual catalogue of images we grew up with. As Bruce entered the vernacular of American music and its psyche, Frankie found his world. And in this book, he shares it with us.” -Eric Meola

Promo #1 "Bruce Springsteen. Further Up The Road". The Limited Edition Book by Frank Stefanko. (05:09)
Wall of Sound Editions is delighted to announce a new limited edition book of photographs of Bruce Springsteen taken by Frank Stefanko. BRUCE SPRINGSTEEN. FURTHER UP THE ROAD, published in November 2017, is an astounding anthology of over 40 years of largely unseen images of Springsteen, all shot by Stefanko throughout Springsteen’s epic career. New Jersey based, self taught photographer Frank Stefanko shot the iconic covers for "Darkness on the Edge of Town" and "The River" albums as well as the cover shot for Springsteen's best-selling "Born To Run" autobiography and accompanying album "Chapter And Verse". The book features a personal introduction text by Bruce Springsteen himself, forewords by fellow Springsteen photographers Eric Meola and Danny Clinch. BRUCE SPRINGSTEEN. FURTHER UP THE ROAD is released as a numbered, limited edition book, available both as a Deluxe (copies 1-350, with an exclusive 10 x 11" signed/numbered fine art print) and a Collector edition (copies 351-1978). All 1978 are signed by Frank Stefanko. The over 400 pages hard-bound book measures 25,5 x 33,5cm (10 x 13" ca) and are published by Wall of Sound Editions, who in 2016 published the phenomenally successful "The Kate Inside", containing never before seen images of Kate Bush, shot between 1982 and 1993 by Wall of Sound’s founder Guido Harari. ORDER at www.wallofsoundgallery.com For further infos and to receive our Newsletter, please email us at info@wallofsoundgallery.com. Original music by Paolo Bonfanti