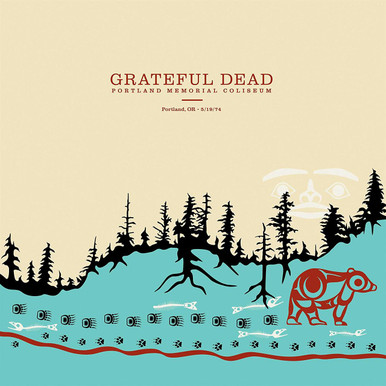 During the Grateful Deads legendary 30-year run, the band often visited its northern neighbours in Portland, Seattle, and less-than-often Vancouver. Even so, official live recordings from those cities are something of a rarity.

The complete Portland Memorial Coliseum concert from 5/19/74 will be released across six 180g vinyl. During the period when the shows were recorded, the Grateful Dead included: Jerry Garcia, Donna Jean Godchaux, Keith Godchaux, Bill Kreutzmann, Phil Lesh and Bob Weir.

The 1974 shows were recorded just a few weeks before the band released its seventh studio album, From The Mars Hotel. The band once again took the opportunity to preview songs from its upcoming album, such as U.S. Blues, Loose Lucy, Money Money, and Ship of Fools. Another song from the album  Scarlet Begonias  was played on its own, three years before it would be linked with Fire On The Mountain in 1977.

In addition to mixing newer and older songs, the band also included a performance of the entire Weather Report Suite. Soon after these shows, the songs Prelude and Part I were dropped for good, leaving behind only the final third of the composition, Let It Grow, which would continue to be part of the bands live shows until 1995.

The show was mastered in HDCD from the original master tapes by Jeffrey Norman at Mockingbird Mastering. The transfers from the masters were transferred and restored by Plangent Processes, further ensuring that this is the best, most authentic that this show has ever sounded.