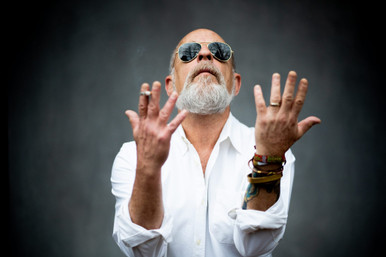 Jerry Joseph + Our Man In The Field, Saturday 2 October 2021 at Smokey Joe's (TICKET)

“One of the greatest live performers I have ever seen and long one of my favourite songwriters, one of the absolute best of our generation.” Patterson Hood (Drive-By Truckers)

Who the hell is Jerry Joseph? Well Patterson Hood and Jason Isbell have gone on record saying he is one of the best songwriters and performers ever, and are such believers that they backed him up on his newest album. Jason Isbell called him one of the greatest triple threats, a great singer, songwriter and performer. Richmond Fontaine liked him so much they took him on support for their UK farewell tour in 2016.

While Jerry has been flying just under the radar in the US for decades, he is unknown in Europe but that is all about to change. Currently residing in Portland Oregon Jerry has been releasing records and touring the States and the rest of the world since the early 1990s.

The Beautiful Madness, produced by Patterson Hood (who also wrote the liner notes), is Jerry’s first proper European release. It is Jerry’s unapologetic manifesto on what in the hell is going on with the world written with concern only for shining a light on the truth. Sometimes Jerry hits you with a sledgehammer but usually it’s a slowburn, building with each line of vivid and raw lyrics as the truth of his stories are revealed. The album was recorded at Matt Patton’s studio, Dial Back Sound, in Water Valley, Mississippi with the Stiff Boys aka all the Drive-By Truckers backing him up for the music on the album, not just a tune or two. It was also the first time the Truckers recorded with Jason Isbell since he left the band in 2007, Isbell plays slide guitar on the searing ballad “Dead Confederate”, which Hood says is “one of the best songs about prejudice and racial hatred that I have ever heard.”

Our Man in the Field

Singer-songwriter Alexander Ellis, reports back from the London small gig scene (in the old world at least) with a set of songs created and evolved by being performed live “wherever the singer-songwriter and folk scenes would have me."

Ellis’ voice covers quite a range including some highly effective falsetto accenting. It betrays a North East background at times which gives an interesting and unusual feel to the songs. This is a fine debut album played and recorded as Ellis himself says honestly and with feeling.