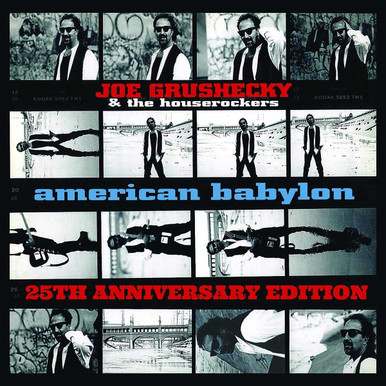 Grushecky and his band had been a club fixture in the Northeast for nearly 25 years when they released American Babylon in 1995. The Pittsburgh band had proven themselves to be the consummate bar band with occasional flirtations with national success. American Babylon found them teaming up with Bruce Springsteen, who handles production, plays on several tracks, and wrote two songs for the album. The title track is an uptempo rocker detailing the disintegration of societal mores. There are plenty of songs outlining love gone wrong and the struggles of common folk, all delivered in Grushecky’s warm, well-worn voice over a barroom mixture of blues-based traditional rock. The 25th anniversary deluxe reissue edition will include LIVE tracks from the Houserockers’ legendary October Assault Tour recorded at an enthusiastic hometown show that same year.

“As the leader of the Pittsburgh-based Iron City Houserockers, Joe Grushecky hammered out four heartland rock albums in the late 70s and early 1980s. These won over more critics than fans, so he became a special education teacher to support his family. Still, he maintained a close relationship with Bruce Springsteen, and in 1995, they teamed up for American Babylon. The two remain tight and play together at least once a year, but this album remains their greatest joint accomplishment.” - Rolling Stone