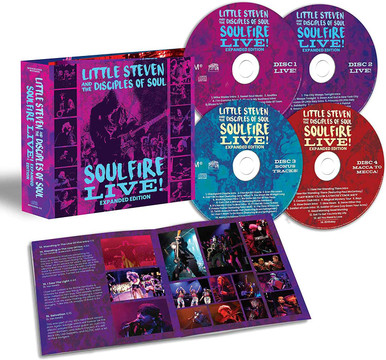 Comprised of the best performances from the North American and European concerts, this CD collection features Little Steven aka Steven Van Zandt and his 15-strong band taking listeners through a musical history lesson as they blast through an arsenal of songs spanning rock, pop, soul, blues, funk, doo-wop, reggae and everything in between.

Nearly every song from his 2016 album SOULFIRE is represented along with inspired covers and classic tracks from his early catalog. The sets culminates with “Macca To Mecca!,” a 12-song tribute to The Beatles that kicks off with a riveting performance of “I Saw Her Standing There” recorded at The Roundhouse in London with a special appearance by Paul McCartney.

It is followed by an extraordinary surprise set at Liverpool’s legendary Cavern Club recorded November 2017 during the band’s sold out European tour.