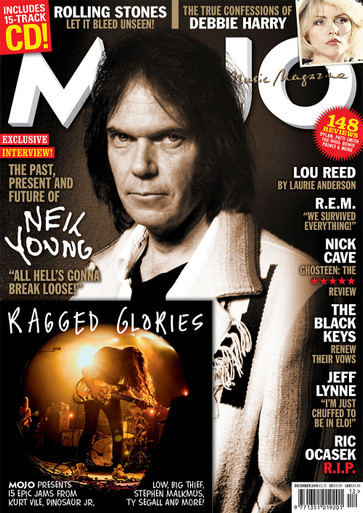 COVER STORY: NEIL YOUNG From high up in the Rockies, the patron saint of Doing Your Thing delivers his latest thunderbolt, forged with the help of weed hits, eco ire and rock’n’roll’s most storied backing band: Crazy Horse.

DEBBIE HARRY The Blondie singer has told her own story at last: adoption, acid, punk, Bowie’s junk, the secrets and lies. But why did it feel like pulling teeth?

THE ROLLING STONES From Olympic to Altamont via Hyde Park and Cotchford Farm, Ethan Russell’s peerless photographs tell the story of Let It Bleed, the Stones’ first masterpiece.

LOU REED As a book of his complete lyrics emerges, Reed’s partner Laurie Anderson offers blazing insight into his world – Rotten Rita, Newspaper Joe and all.

CATE LE BON Back to her West Wales hometown with Britain’s most unusual songwriter, fêted by John Cale, Deerhunter and more for her psychedelic spirit and studio suss.

MARK LANEGAN An elemental voice. A helluva life – from peak grunge to 8-day coma to solo salvation. The takeaway? “You don’t have to get shittier as you get older.”

R.E.M. Folk-rock gave way to glam, irony and volume when Athens’ finest unleashed their Monster. 25 years on, the band relive a divisive album and watershed tour.

BETTY WRIGHT How to survive and thrive in the rigged game of showbiz, with one of ’70s soul’s great unsung voices. “Don’t cry over spilt milk,” she advises.