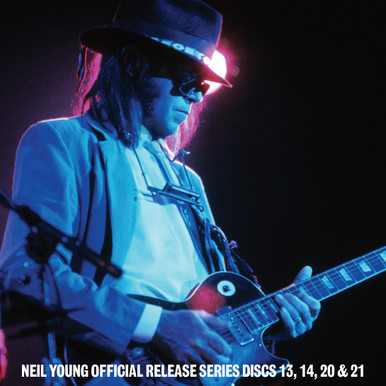 Neil Young announces the release of the fourth installment in his Official Release Series (ORS): a box set that includes his classic ‘80s records Hawks & Doves, Re•ac•tor, and This Note’s for You, as well as his Eldorado EP, previously released only in Japan and Australia.

The ORS Vol 4 collects an eclectic set of decade-spanning sounds. Hawks & Doves (1980) revisits his folk roots and explores some of his most country-leaning offerings; the blistering Re•ac•tor (1981) showcases a stomping set of heavy, overdriven rock with Crazy Horse; and This Note’s for You (1988) casts Young as a big band leader, belting out intricately arranged blues. The Eldorado EP (1989) is full of feral distortion and earthy crunch featuring Young backed by The Restless (Chad Cromwell and Rick Rosas). It includes two thundering tracks — “Cocaine Eyes” and “Heavy Love”— not available on any other album.
ORS Vol 4 collects a large swath of his diverse and compelling ‘80s work, testifying to the legendary songwriter’s gift for sonic shape-shifting.