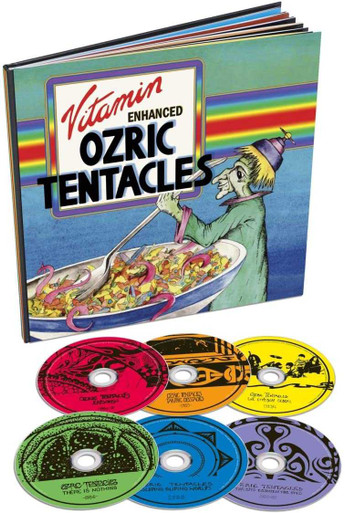 6Cd Remastered Set From Psychedelic Experimentalists Ozric Tentacles Born at Stonehenge Festival in 1983 the band gained an initial fanbase through a string of self released cassettes. These simple artefacts with photocopied inserts and rainbow, spray painted labels sold in vast quantities at festivals, at the infamous Club Dog and through their mail order to fund and support their journey through the 80s.

These six albums on cassette became so treasured that in 1993 they were remastered and packaged together as a limited edition six CD box set called Vitamin Enhanced, released on the bands own Dovetail Records label. It is time to celebrate Ozric Tentacles with a new deluxe book edition of Vitamin Enhanced. The set contains all 6 of the cassette albums on CD, having been beautifully and painstakingly remastered by Ed Wynne & also features a 48-page book with the original Richard Allen liner notes and a new foreword by Ed Wynne.

Vitamin Enhanced is released via 6 CD Book Edition through Kscope on 30th April 2021.