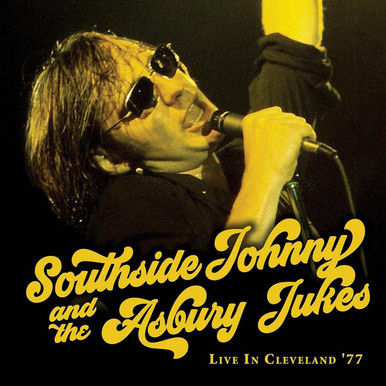 Southside Johnny and The Asbury Jukes - Live In Cleveland '77 (CD)

Before Southside Johnny and the Asbury Jukes even had an album on the shelves, they were being played on the radio in Cleveland. That’s how far back the New Jersey band’s relationship goes with the city.

As the “Jukes” part of their name would suggest, Southside Johnny and his group were spiritually a band from another time. They had a big sound (and a full horn section, courtesy of The Miami Horns) that conjured a vision of a large band, jammed together on the bandstand.

Which was hardly far from the truth on a number of nights. Mixing carefully chosen blues and soul covers with their own originals (and some choice songwriting contributions from Bruce Springsteen), they had a live show that was even more potent than what had been laid to tape in the studio.

This 1977 performance at the Cleveland Agora was the group’s second outing at the legendary venue in less than a year. Live in Cleveland ‘77, the recorded evidence of that night, presented here for the first time by Cleveland International Records, shows exactly why they would become frequent visitors and really, honorary Clevelanders. Songs like “I Don’t Want to Go Home,” Springsteen’s “The Fever,” “Havin’ a Party” and “Without Love” were already well-loved favorites with the local audience, thanks to frequent airplay on WMMS long before they even had an album.

Cleveland got a special bonus round that other cities would have killed for. Ronnie Spector had joined the group in the studio as they recorded that debut and came to Cleveland to share the stage with the Jukes, sharing her soon-to-be-legendary take on Billy Joel’s “Say Goodbye to Hollywood” with the Agora crowd. As she did with so many songs, Spector made it her own.