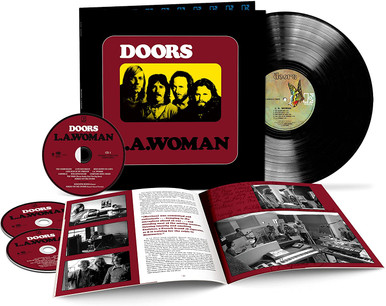 L.A. WOMAN (ORIGINAL STEREO MIX REMASTERED)
Side One
1.The Changeling
2.Love Her Madly
3.Been Down So Long
4.Cars Hiss By My Window
5.L.A. Woman

Side Two
1.L’America
2.Hyacinth House
3.Crawling King Snake
4.The WASP (Texas Radio And The Big Beat)
5.Riders On The Storm

The Doors found their mojo (and Mr. Mojo Risin’) in November 1970 as they recorded L.A. Woman over six days at the Workshop, the band’s rehearsal space on Santa Monica Boulevard. A success both critically and commercially, the album was certified double-platinum and contains some of the band’s most enduring music, including the Top 20 hit “Love Her Madly,” “Riders On The Storm,” and the title track.

To commemorate the album’s 50-year anniversary, Rhino keeps on risin’ with a 3-CD/1-LP set that will be available on December 3rd. L.A. WOMAN: 50TH ANNIVERSARY DELUXE EDITION includes the original album newly remastered by The Doors’ longtime engineer and mixer Bruce Botnick, two bonus discs of unreleased studio outtakes, and the stereo mix of the original album on 180-gram virgin vinyl.

For this new collection, the original album has been expanded with more than two hours of unreleased recordings taken from the sessions for L.A. Woman, allowing the listener to experience the progression of each song as it developed in the studio. An early demo for “Hyacinth House” recorded at Robby Krieger’s home studio in 1969 is also included.

The outtakes feature Jim Morrison, John Densmore, Robby Krieger, and Ray Manzarek working in the studio with two additional musicians. The first was rhythm guitarist Marc Benno, who worked with Leon Russell in The Asylum Choir. The other was bassist Jerry Scheff, who was a member of Elvis Presley’s TCB band.