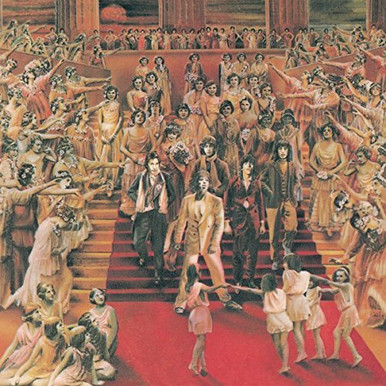 One of the most successful, prolific, thrilling and influential bands of all time are to release 14 re-mastered classic albums throughout 2009.

Now fans will get a chance to rediscover many of their past favourites and unearth some forgotten gems along the way too ...all re-mastered and sounding better than ever.

The seventies was the decade when the Rolling Stones became known as the world's greatest rock'n'roll band, a tag they thoroughly deserved and have yet to lose. They performed groundbreaking concerts in arenas and moved effortlessly into open-air stadiums. They stuck their collective tongue out at the British establishment and became citizens of the world. They made front page news wherever they went, from the French Riviera to Switzerland via the US and Canada. They set up their own label and made the most of their new-found artistic freedom. And, most importantly, they issued a series of definitive studio albums, on a par with the best work they had produced at the end of the sixties.

It's Only Rock'n'Roll
Produced by Mick Jagger and Keith Richards under their Glimmer Twins guise, It's Only Rock'n'Roll was another number one album in the US in 1974, and contains two hit singles, the title track and a great reworking of an old Motown favourite, The Temptations' Ain't Too Proud To Beg. Guy Peellaert's fin de siècle sleeve beautifully captures the mood of the times. Mick Taylor ended his tenure with some wonderful guitar work on Time Waits For No One while his eventual replacement Ronnie Wood hosted the sessions for It's Only Rock'n'Roll (But I Like It), a concert favourite to this day.