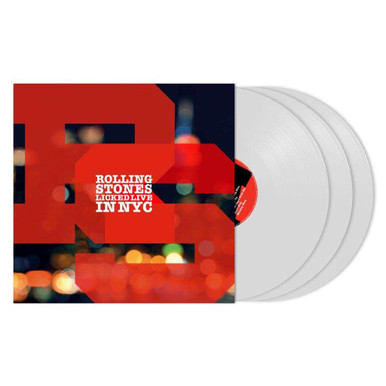 Side D
1. You Got Me Rocking
2. Can't You Hear Me Knocking
3. Honky Tonk Women

“New York City, top of the world…” testifies Mick Jagger after a raucous performance of “If You Can’t Rock Me”. “It’s great to see you here looking really beautiful tonight all dressed up. You think you’re on TV or something?”

New York, NY - In 1964, The Rolling Stones arrived to absolute mayhem for their first show in NYC, after the release of their debut album The Rolling Stones. Having played New York City multiple times, at several venues, it was only fitting that in January 2003, as part of their 40th anniversary tour, they made it a point to return to New York’s most celebrated arena… Madison Square Garden.

Indeed, this was a special night in the midst of the Rolling Stones’ 40-year celebration tour with the NYC crowd bearing witness to a razor-sharp performance that is evidenced throughout this entire set.

Mercury Studios will proudly present Licked Live In NYC. Originally released in 2003 as an HBO special and as part of the Four Flicks package, this concert has been fully restored and remastered with four previously unreleased songs: “Start Me Up”, “Tumbling Dice”, “Gimme Shelter”, and “Sympathy For The Devil.”